Saikou Marong, the member for Latirkunda Sabijie Constituency told The Point that he voted against the draft constitution because it is designed to politically favour some individuals.

“I voted against the draft which is politically motivated to favour individuals. My second reason is; I voted against it because with the 1997 Constitution Parliament cannot pass retroactive laws.”

Madi Ceesay, the lawmaker for Serekunda West  said: “I voted in favour of constitution for two terms limit to be adopted – that the president whoever he appoints; like ministers, chief justice and other high positions, parliament vet  their appointments.”

EU celebrates 70th anniversary of Schuman Declaration which led its establishment United in diversity, in solidarity and in adversity

On Saturday 9 May, Europe day, the start of economic and political cooperation among European countries was celebrated across the European continent. 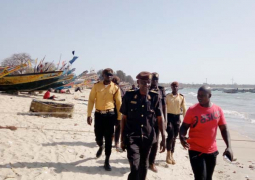 As the fight against the deadly coronavirus intensifies, officials of The Gambia Immigration Department (GID) at Tanji Fish Landing Site have refused the landing of three Senegalese boats carrying more than forty people.

Amid the rapid surge of covid-19 cases in the country, local fish vendors within the communities of Gunjur, Sanyang and Tanji have decried the current rise in prices of fish due to less activity of fishing vessels.

Quadrangle, Banjul, 15 May 2020 – Following the announcement of a US$30 million development policy grant to The Gambia, the Minister of Finance and Economic Affairs, Honourable Mambury Njie, on behalf of the government of The Gambia, on Friday expressed gratitude to the World Bank Board of Executive Directors for the development assistance.