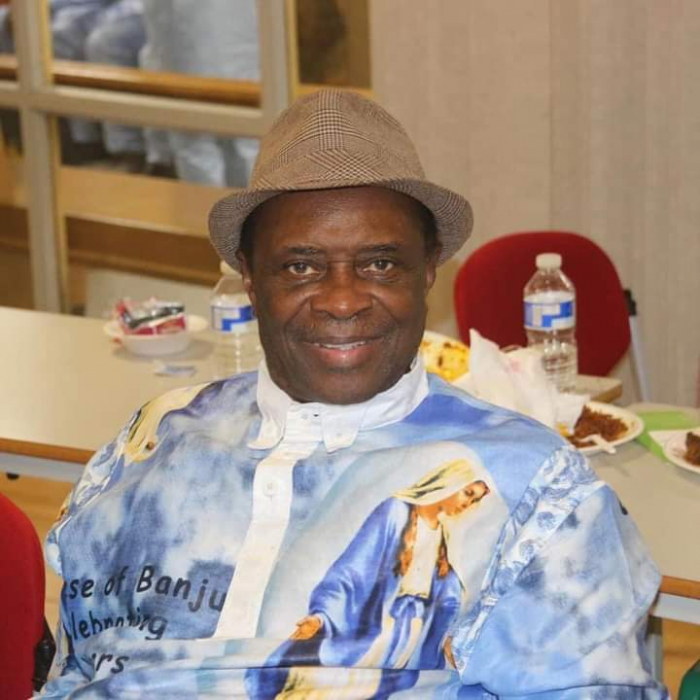 Many a legend have been known to excel only in one particular field or another. For George this is not the case having indulged very well in multiple/various specialties.

He was a spectacular sports icon, infield of play and in sports administration and management. He did more in this area than any Gambian, present or past. In football he was one of the most effective right wingers in the game for Augustinians Football Club and Gambia 11, to be compared only to the legendary Daddy Tamba who had a reputation for speed and blistering shots. But George was probably speedier than Tamba; his speed earned him the nickname ‘404’ after the fast French-model car, Peugeot 404. The only unfortunate thing was that his fellow attackers including Solomon Jatta (Body Balance) were never able to catch up with him, resulting usually in wasted crosses which he magnificently fed into the penalty area, with no attackers there to finish off the play. I remember clearly that when he was obviously frustrated by this, he would cut in towards the 1st post and complete the attack himself. It was in that style that George scored one of the winning goals in a 3-2 defeat over Senegal in 1962 in the Kwame Nkrumah West Africa Gold Cup, (the last time that Gambia defeated Senegal in an official (non-friendly) match).

Not only in football, George was also powerful in athletics, as a middle distance runner on the national team in 800 metres, 1-mile, and 400 metres relay. He virtually always took 1st place, known and celebrated for his sudden burst of speed in the final two hundred metres of very well-timed races. His only rivals were Janneh Jagne of Methodist Boys High School, Sigismund Gibbs, Eugene Decker of St. Augustine High School, and Cherno Barra Touray of Armitage High School.

George served athletics, football and sports generally for a long period of time, following his great active participation. He served as Secretary General of the Gambia Amateur Athletic Association (GAAA) for the years when Gambia and Senegal met in very boastful nationalistic rivalry; and contributed significantly in the preparatory arrangements in both Track and Field. He served as first Executive Director of the Gambia National Olympic Committee (GNOC) for quite a long period of distinguished service (1991-2004) during which he collaborated strongly with the GNOC president, Abou Dandeh Njie, for the development of many an athlete, coordination of successful international missions as CHEF de Mission, the most notable being the Commonwealth Games held in Manchester in 2002 when Gambia showed up in all their events and exceled in cycling, in addition to the Olympic Games of 1996. Between the two of them they brought many an IOC/IAAF project and funding to The Gambia, and were instrumental in Gambia securing some key positions in that influential world body. He was Secretary General and President of the Gambia Football Association from 1990-1992 during challenging times of the Association with regards succession and running of the league. He later served in the Executive Committee, and forever has been its loyal and reliable adviser. He was instrumental in the setting-up of the National Sports Council (NSC) in the year 2000 after serving as Chairman of the Interim Planning and Implementation Committee of the new Council between 1998 and 2000.He was one time Member of the Independence Stadium Management Board (2000-2003) on which he helped promote the transformation of the Stadium to a more viable entity making more optimal use of its hostel and other facilities. While he organized the first sports awards ceremonies of the GNOC, and later the GFF, he himself was a recipient of highly prized sports and sports administration awards, e.g. the GNOC Hall Of Fame Award, an Order of Honor and recognition from the Sports Journalists Association of the Gambia (SJAG) among other prestigious awards.

Maybe we would also want to appreciate George as a leading figure, an icon, in the promotion of Gambian culture. This is important from point of view of the enormous benefits that derived from his work. As early as the Sixties he set the stage for what was to become a music and social ‘revolution’ for youths of The Gambia. He somehow managed, based on his great organizational skills and public relations, to get one of Africa’s most famous bands (Rico Jazz of Congo Brazzaville) to play in The Gambia, the first time any African or other band of such eminence performed in The Gambia. That event impacted the nation, the youths in particular. That was exactly what George wanted to achieve: something that would entertain, energize and socially arouse the nation, especially the youth. Before Gambians could finish relishing such an unprecedented communal socializing, George managed yet again to bring over another top-notch African Band (Geraldo Pino and The Heartbeats of Sierra Leone) to provide more musical and social involvement of the youth. It was a culmination of these musical fiestas that must have sparked the formation and promotion of Gambian music groups and great interest in public dances. Very good Gambian bands such as Super Eagles and Ifangbondi emerged and flourished, creating big waves in Gambia, Senegal and beyond, even in Europe. Young rising Senegalese artistes resident in The Gambia took the music fever to Senegal. Gambian music groups continued to rise and diversify since then. We can say ‘Thanks” in part to Uncle George for his initiatives

From musical bands, George extended his creative horizon to Fashion and Beauty Contests under the banner of Gomis Promotion. He advocated that all these developments would help give Gambian women-folk in particular, a new social awareness and orientation and a sense of self-esteem. We can see from this what George has always showed in his life, namely a lot of care and consideration for others whose interest he always selflessly tried to serve and to promote.

He was lately to become an avid author, his most authoritative secular writing being a chronicle for which he gave me the honour of launching, ’Milestones in Gambian Football’ which features some Gambian football ‘Greats’ such as goal keeper Amou Taal, forwards Francis Eku Forbes, Daddy Tamba, Modou Njie (Biri), Solomon Gomez (Garincha) etc., contributors to Gambian football, and the development of the game in The Gambia. It is a book or booklet worth reading to understand more clearly the history and evolution of football in this country from tough beginnings (paucity of materials and facilities, not-so-satisfactory travel arrangements or incentives, inadequate competition exposure etc.) to the present position. It should make current teams and their technical and financial supporters want to work harder. He also wrote a number of religious texts, Dramatized Passion of Christ, compiled cassettes of various choral groups for the records and use of parishioners. All of this form part of George’s great legacy.

I wish to sum up by stating again that George was an icon of icons set apart by his excellence not in one but in numerous areas of intervention. How has he been able to achieve all these accolades in one life-time? I would say that he had this other gift of getting his different personal projects going simultaneously. He had that type of mind-set and ability, I believe. Goodbye to my good mentor and friend. May he rest in peace! May Heaven be his eternal abode! May the Almighty bless and reward him abundantly! May his memory be a blessing! Amen! Amen!