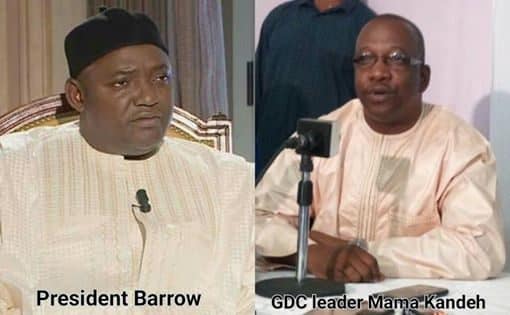 In a press release issued by Mamma Kandeh, the party’s secretary general, GDC accused Mr. Barrow of taking The Gambia through a series of difficult health guidelines and protocols such as locking down of schools among others since March 2020.

“Gambia Democratic Congress strongly condemns gathering of crowds currently being held by President Adama Barrow around the country. President Barrow, since March 2020, has taken the Gambia through a series of difficult health guidelines and protocols such as locking down of schools, markets/Lumos, public places and sets of declarations of public emergencies due to Covid-19 and enactment of Public Health Protection Regulation  2020, most of which are still in effect. People including respectable elders have been paraded in courts alleged for breaking Covid-19 regulations and asked to pay sums in lieu of jail terms for violating the health regulations for dangerous and infectious disease.

Unfortunately, Adama Barrow being the president of The Gambia who is responsible for defending all those health regulations mandated by the Gambia 1997 Constitution (Section 7) (a) Acts of national assembly made under this constitution and subsidiary legislations made under such Acts; (b) Any orders, Rules, Regulations or other subsidiary legislations made by a person or authority under a power conferred by this constitution or any other law, is the very one proud of breaking them without any remorse.

It is ill-fated that President Barrow can put behind the numerous financial bailouts and expert advice our country have solicited both at home and international donors since March 2020 and would risk another possible wave of the corona virus due to his actions in gathering crowds without following health guidelines.

Barrow should been worried enough when his own Minister of justice stated that they are breaking Covid-19 health regulations. The Schools and provincial markets are closed for the longest without coming up with a plan to reopen when the worst affected countries are reopening, instead President Barrow turned a blind eye and continues to put his political interest before the safety and security of the people of this country especially those in provincial Gambia.

The Barrow administration will have no legitimacy to further caution or punish anybody for violating Covid-19 regulations, which they do not adhere to as a government. It is high time for Gambians to realize that President Barrow does not respect the laws of the Gambia and live by violating his own rules, therefore cannot deliver justice to the people.

We condemn in totality, the president’s recent crowding activities during these difficult times of COVID-19.

GDC takes this opportunity to remind the Inspector General of Police that no one is above the law and respect for the law is a duty of citizens. Moreover, rule for one should be rule for all. The police should stop all public gatherings that fail to heed to the current health regulations. It is the duty of the police to enforce the laws and that the police must do.”