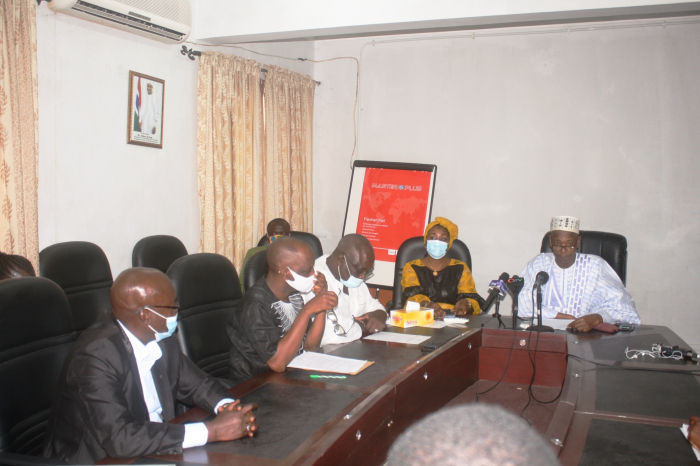 Minister Hamat N.K. Bah described the signing of the agreement between NCAC and GIGO Construction an important ceremony for Gambian heritage and tourism.

Minister Bah disclosed that in the first quarter of the year, “NCAC received D2.8 million from the ministry towards the rehabilitation of heritage sites in the country in order to preserve them and also to make them better tourist attractions. This ceremony therefore, marks the formal start of this important project.”

Among the importance of the project as highlighted by the minister, “Kerr Batch Stone Circles Site is a UNESCO World Heritage Site since 2006, a part of selected heritage sites of interest to human kind in the world, which offers great potential in attracting visitors.”

He dilated on the present condition of the site, saying; “ the site including the perimeter fence and exhibition rooms and the water supply have dilapidated over the years until becoming an eyesore. And it is not an ideal situation for a UNESCO World heritage site like Kerr Batch. This is why when the capital fund from the NDP came; I advised that Kerr Batch site be given urgent priority.”

He said the site is located in Nianija, one of the isolated areas in the country but with rich and vibrant culture which deserves to be preserved and protected in the site museum for posterity.

He therefore confirmed that “Nianija District will soon benefit from a road network and power supply thanks to the support of his Excellency President Adama Barrow.”

“It means,” he added, “this project has come at the right time. The road and power supply will surely open up Nianija District to visitors, including international tourists who will now be able to enjoy the refurbished site.”

He noted further that after the completion of the project the NCAC will be able to hire additional staff to run the site and museum “this will offer job opportunities to people in the area.”

Above all, he emphasised that the works fall in line with the NDP goals of using heritage and culture to power Gambian tourism, and “we therefore remind the contractor to work diligently so that he could complete the works in due time for opening before the end of this tourist season 2020/2021.”

Hassoum Ceesay, director general of NCAC, noted that Kerr Batch Stone Circles is the most interesting stone circles site in the country “especially for its V-shape stone which still today historians and archaeologists do not understand its significance.”

He explained that in 2005 under UNESCO support, a site museum was established at Kerr Batch but due to poor road network it was not accessible and the museum collections were taken to Wassu for safe keeping. “The collections will be returned and exhibited in Kerr Batch the moment the rehabilitation is completed,” he assured.

He described GIGO Construction as a reputable construction company, assuring that they will do a great job which will befit the UNESCO World Heritage Site.

According to him the contract works will cover rehabilitation of a standard office block, three exhibition halls, corridors, construction of external works boundary fence and drilling of solar borehole set with overhead tanks and pipe network for water supply at the site.

He therefore thanked the MoTC for its support to NCAC. He also extended gratitude to NCAC Board members for their advice to the staff of NCAC and the community of Nianija as well, including the chief and their representative at the NA.

The contractor, A Gigo on behalf of his company, thanked the Tourism Ministry and contract committee for awarding the contract to them based on merit.

He said the contract serves as a motivation for his company to continue in their endeavour. He also reassured the ministry and NCAC of first class delivery without compromise on the standard.