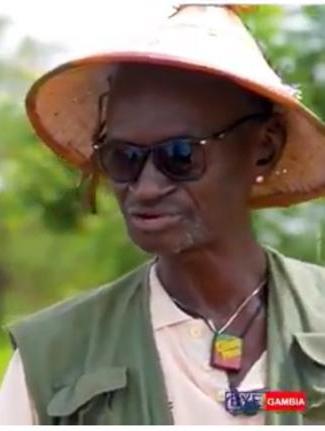 Popular Stone Man passed away last Wednesday. He was 63, and had served as staff of the National Centre for Arts and Culture for 18 years.

Giving a brief history of the renowned Stone Man, Hassoum Ceesay, director general of the NCAC said Pa Sanyang had worked as a site attendant at Wassu Stones Circle site from 2001 to 2019 when he retired.

There are more than 200 stone circle sites in The Gambia, the Wassu site is the biggest and most prominent and “Stone Man was very familiar with the stones at Wassu and keen to interpret their meaning stature,” he expressed.

“The Stone Circles are part of a major collection of sites that include various forms of burial mounds, isolated pillar stones, single circles and groups of stone circles that may represent cemeteries, or burial sites. And much research is still needed to solve their mystery,” he disclosed.

Among other things, Pa Sanyang, the NCAC boss said Stone Man was also a tour guide to natural and heritage sites in other parts of the CRR north. He added that on his own, he created a popular nature tour which allowed visitors to see wildlife like hippos in the River Gambia.

He indeed described him as “an entrepreneur in the heritage and tourism sector.”

Recapitulating his hardwork, he explained that during the long process of listing Stone Circles in the UNESCO World Heritage List in 2006, late Stone Man was an important player in the NCAC team, led by Baba Ceesay, former director general of NCAC “which worked very hard to get the listing into the prestigious list.”

“Stone Man indeed gave the Wassu Stones Circle site much attention and a very high profile, and he had worked hard to bring visitors to the site and he would be missed by all those who have interacted with him at the site including children, scholars and tourists and we at the NCAC miss him, too,” DG Ceesay said in a mourning mood.