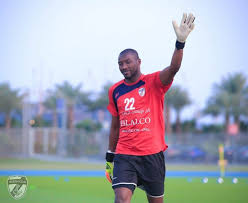 This is a core objective of the Gambia Football Federation for a country to acclaim itself with a cream of players ready for competitive matches.

Following CAF’s pronouncement of the Afcon Qualifiers resuming in November 2020 where the Gambia will square off Gabon, the Scorpions are in strong footing as Group D leaders to continue blazing the trail under the Belgian Tactician Tom Saintfiet. As such, we bring to your reach an overview of the Scorpions in a serialized profile segment of each member of the current squad of the National Team.

In this maiden episode, we bring you the profile of Scorpions number One and Jeddah FC (Saudi Arabia) Goal keeper Alagie Modou Jobe (Toldo).

Born in Sanyang village Kombo South, Toldo is the current number one for both club and country, a feat he prides himself with having maintained the record for a relatively good period (2007).

The former Real De Banjul, GAF goal keeper was nicknamed after Italian legend and former Inter Milan Goalkeeper due to his blistering and acrobatic skills between the sticks.

He started his career at the Coastal village shortly before moving to Bundung in the Kanifing Municipality where he featured for local Nawettan teams in the area.

Toldo 31, started wining the hearts of local managers at Flamingo FC of Bundung, Nguma FC and Ball Kongi were he won League Trophies and been eventually voted Best Goal Keeper. The village boy came to become the prime choice for Sere Kunda East Zonal Team having where he won the much loved Zonals (Super  Nawettan ) with Serekunda East for a number of years unbeaten.

He premiered his League football with Flamemins FC a 1st Division side in the then GFA League. After a short spell with the Sere Kunda side, he joined Real De Banjul in late 2006 where he won three titles with the Whites 2007, 2012 and 2014. He moved to GAF for a season spell and won the 2008/09 Season with the Khaki boys before making a comeback to the capital based side Real De Banjul.

The Saudi based Gambian Goal keeper pursuing for an international career, was sold to Senegalese League One side Niarry Tally in 2014 where he spent two years with the former Champions and would later switch to Linguere FC from 2016-2017. pursuing for higher international careers, Toldo later signed for Nigerian heavyweights El-Kanemi Warriors in November 2017. He made his debut for the Warriors in the Nigerian Professional Football League in March 2018 and continued as a regular for a season long until 2019 when he joined Jeddah FC in Saudi Arabia where he currently serves as leading Goal Keeper for the Saudi Arabian side.

Alagie Modou Jobe made his debut for The Gambia National Team at 22 when he was an under study to erstwhile Scorpions face Pa Dembo Touray who would later retire his shirt number to the fans favorite. Toldo continued in all of the Scorpions’ matches both home and away at Afcon and World Cup Qualifiers. He served under both local and foreing Coaches, Sang Ndong, Alagi Sarr, Bornu Johnson (late), Paul Put, Rubinacci, Roberto Mancinni, Raul Savoy, and current Coach Tom Saintfiet who hails the Gambian international as an exceptional player with maturity.

At both the World Cup and Afcon Preliminaries, Jobe was a key and formidable member of the Scorpions without absence in Tom Saintfiet’s lineup. His presence at all of Gambia’s matches in the past editions of the World Cup and Afcon Qualifiers shows his love and loyalty to country. He last played for the Scorpions in an intriguing two all draw at Scorpions Afcon Qualifiers at home to the Leopards of DR Congo held at the Independence Stadium in Bakau on Monday 18 November 2019. He was credited for Man of the Match at Gambia’s final prelimnary match for Afcon Qualifier to Djibouti at home as he became the savior in the playoffs when the match went into shootouts.

Alagie Modou Jobe will be hoping to make history by leading the Gambia to her first ever Total Africa Cup of Nations when matches return with a double header to Gabon as the Scorpions top Group D with 4 points.