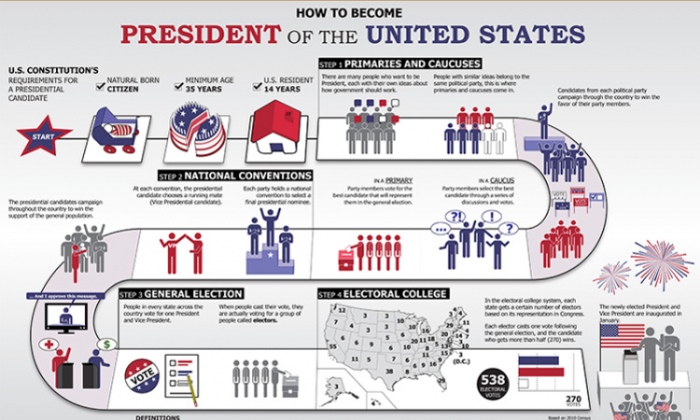 The candidate who wins a state’s popular vote typically earns the support of that state’s electors, who are chosen by state legislatures. Each state is allocated a different number of electors based on census results.
Winning 270 electoral votes or more puts you in the White House. And because some states carry more electors than others, it is possible — and perfectly legitimate — for a candidate to lose the popular vote but win the election. That’s why presidential candidates typically focus on winning states like Texas (38), Florida (29) and New York (29) as opposed to Vermont, Wyoming or Alaska, which all have just three electoral votes. Winning three states can mean 96 electoral votes or just nine.
Out of the last 45 contests, five have produced commanders-in-chief who did not win the majority of the popular vote, including George W. Bush in 2000. In 2016, Donald Trump lost the national popular vote to Democrat Hillary Clinton by 2.87 million votes, but secured 304 electoral votes to her 227.

Why are there 538 electors?
There is one for every seat in Congress — 100 senators and 435 representatives — plus three for the unrepresented District of Columbia.
Here, in descending order, is the number of electors pledged by each state:
55: California
38: Texas
29: Florida, New York
20: Illinois, Pennsylvania
18: Ohio
16: Georgia, Michigan
15: North Carolina
14: New Jersey
13: Virginia
12: Washington
11: Arizona, Indiana, Massachusetts, Tennessee
10: Maryland, Minnesota, Missouri, Wisconsin
9: Alabama, Colorado, South Carolina
8: Kentucky, Louisiana
7: Connecticut, Oklahoma, Oregon
6: Arkansas, Iowa, Kansas, Mississippi, Nevada, Utah
5: Nebraska, New Mexico, West Virginia
4: Hawaii, Idaho, Maine, New Hampshire, Rhode Island
3: Alaska, Delaware, D.C., Montana, North Dakota, South Dakota, Vermont, Wyoming
Total: 538
When does this voting take place?
While we’re all accustomed to finding out who won on election night, the president is not formally elected until the electors cast their votes. They always meet the Monday after the second Wednesday in December following the election. This year, the electors will meet on Dec. 14 to cast their votes. Both chambers of Congress will meet on Jan. 6 to count these votes and officially name the winner.
Electors are “pledged” to a presidential ticket based on the results of the popular vote in each state or district. In most cases, all of a state’s electors go to the candidate who gets the most votes in the state; Maine and Nebraska also use the results at the district level to allocate a share of their votes.
But, yet, it’s not that straightforward. “Faithless electors” can still cast their vote against the candidate that they are pledged to vote for. Seven such “faithless electors” actually voted in 2016 for someone other than the candidate to whom they were pledged: two in Trump’s column and five in Clinton’s.
The rules, you see, are enshrined in the U.S. constitution. But so, too, is the power the states have to decide amongst themselves how to follow them.