The ”Kutejonbulu” Youth association of Jah Kunda village in Wulli West, has embarked on massive tree planting exercise to recover the forest cover of the District.

He made the remark during the weekend of 5th September 2020.

The tree planting exercise which is sponsored by Lamin Barrow, a native of the village and President of the forest users’ association of the Gambia, provided 600 seedlings.

Speaking during the exercise, the newly appointed Governor for Upper River Region (URR) Samba Bah, commended the Youth association whose primary objective is to restore the forest cover. 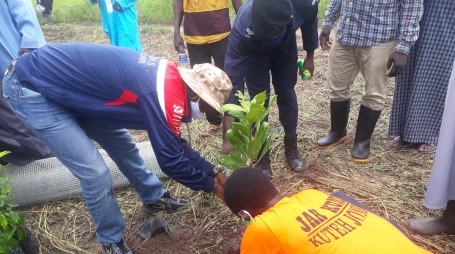 He said the Government of the Gambia has a policy to make the country green and this is what is being replicated in URR and it has started.

The Assistant Forest Officer for the area Jalamang Darboe said the Forestry Department has a new slogan called ‘tree growing’, instead of ‘tree planting’; that with the old slogan, trees are just planted and left to be destroyed by wild forest fires or animals.

Darboe gave a run-down of the different types of seedlings being planted which include mahogany (jalo), tamarine, cashew and Gmelina; that all these four spices have diverse benefits to the environment and the people.

Lamin Barrow, the Chairperson of the forest users’ association, expressed his appreciation to be part of such a noble exercise for the community.

Other speakers included the Chief of Wulli West, the VDC Chairperson and lady president of Jah Kunda village, and the president of Youth association.

At the end of the exercise, the association awarded prices to the care takers of the trees planted last year.